This ashy Imhotep nonsense is getting out of hand: 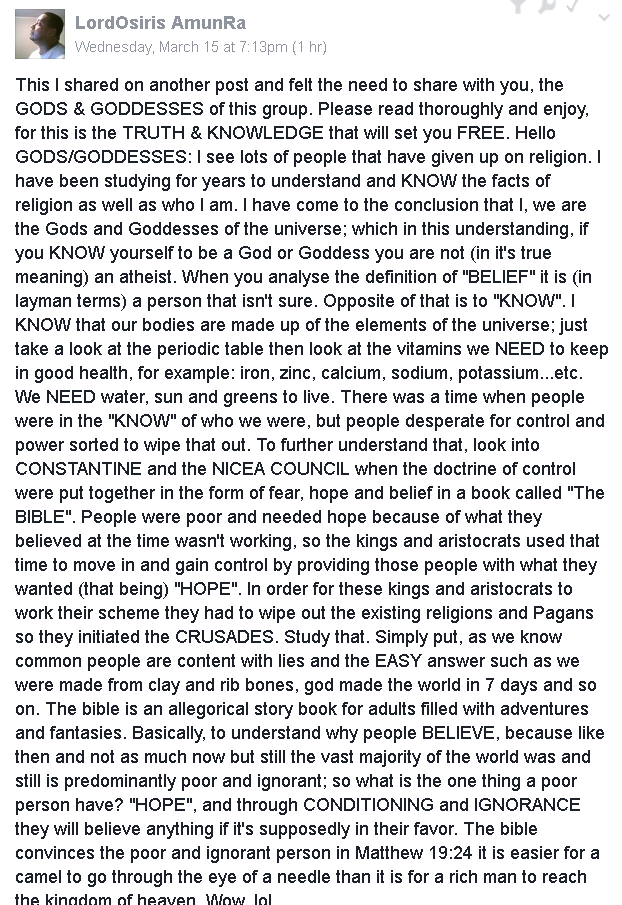 No evidence, no sources or references just a bunch of bullshit. He blocked me and changed his Facebook name of course. I was told to “look it up” when demanding for evidence. I was then told to stay in my place and figure out who I am because he builds and destroys. He provided scriptures so I should have known that I wouldn’t have gotten anything I’ve asked for just on that alone.

There’s no such thing as a ‘woke Christian’.

What’s with these conscious blacks that claim they are ‘woke’ but looks to me to be in a coma? Some of you woke black people should seriously consider taking a goddamn nap. I can’t really tell which part of ‘woke’ some of you are. It must be the part that allows you to preach and inject logical fallacies and nonsequiturs into a metaphorical yoni with your third eye and essential oils.

While I’m on the topic of hotep: I hope they realize Egypt isn’t the only place in Africa. They’re so obsessed with this ideology that black people are descendants of Kings and Queens all that ash has clouded their judgment. Stop it. We’re not even from Africa. Listen to me you ashy, delusional, cherry-picking motherfuckas, you’re annoying! Your arguments are pointless, baseless, worthless and useless. This conscious movement is becoming as bad as religion itself. Your proselytizing is unattractive and you should feel bad.

This is just one example, but they run in groups. I’m sure he’ll return under another moniker and will have to run and change his name again.

It’s long overdue and I’ve been holding back from doing this blog, but I’m bored so…

I was subscribed to this website’s blog for a while. I’ve always had this feeling that some of the writers post things out of their realm of comfort; especially about  atheism. A lot of their posts about atheism are labeled wrong. It’s like they have an agnostic write those posts, or someone that’s not an atheist at all. Anyway, moving on.

That isn’t something you need to worry about. I’m not trying to force my lack of beliefs on you, and if I’m wrong, so be it. I’ll cross that bridge when I get to it. But I live a good life, and I would hope that a just and loving deity would be okay with that. -Mommyish

If you’re going to be open and out about your atheism, you should be open to people asking questions. Answering this question isn’t forcing your lack of beliefs on them. They asked. I notice the sarcasm and condescending undertones of the response, but “a just and loving deity” is just falling right into their trap. That leaves you open for a harsh response.

9. “What stops you from stealing/lying/punching babies in the throat?”

Seriously? Is this a serious list? I’m only at number nine and I’m already amused that my expectations were higher than they should be. This is another question that should be answered. Listen, if these people are asking you these questions, they must want to know, right? If they’re saying shit like “You’re an atheist, so you have no morals!” then okay, fine. Again you’re open and out about your atheism, answer the question. The baby eating? Why even entertain that with an answer? That’s what kills me. They say these things knowing it’s not true to get under your skin. Take note at the jail population, notice how most of them aren’t atheists, which leads me to believe babies are staying out of atheist’s stomachs. Give them that tidbit and they’ll realize they need new material. They ask a stupid question, give them a solemn answer. Don’t fall into their trap and get pissy, that’s what they WANT you to do. People ask that when they’re out of regurgitated rebuttals.

Nope, my life is just fine. Have I had my fair share of trials and tribulations? Of course, but everyone does. There isn’t a god-shaped hole in my heart any more than there’s a Flying Spaghetti Monster-shaped hole in yours. -Mommyish

As I edge closer to the end of this list, I’m convinced that a lot of these “things” should have the same response.  I can come up with a better list of things not to say to an atheist mom. That are actually RELEVANT.

You can’t hate something you don’t think exists. I don’t hate your god anymore than you hate the thousands of gods folks have believed in since the dawn of time. Everyone is an Atheist, I just believe in one less god than you do. -Mommyish

I just noticed something. These statements have shit to do with an atheist mom – just an atheist. Anyone would say this to any atheist, not just a mother. OMG.

No, I don’t. It’s great that you do, and I would fight for your right to believe, but I don’t have to have faith in anything. -Mommyish

If this ruffles your feathers, get over it. Again, you’re open with your atheism. Some statements does not call for a response. This is one of them. Pick your battles. You’re a mom first. What does this have to do with an atheist mom, again? I’m still trying to figure that out.

That argument hold as much water with an Atheist as saying “It’s all right there in harry Potter” does to you. Not because we hate your bible, but because we don’t follow it and don’t believe in it. Simple as that. -Mommyish

At what point are you not expecting this to be said to you? I have to ask again, what does this have to do with being an atheist MOM? You should just live in your home, remove yourself from social networking, or keep your atheism to yourself if this is something you hate being said to you.

There might be a cult of personality surrounding certain controversial Atheist figured (think Richard Dawkins or Christopher Hitchens) but no, Atheist is NOT a religion. It’s the simple lack of a beliefs in deities. And blaming Atheism in general for the epic douchebaggery of certain zealots is like blaming Christianity for the Westboro Baptists.

You wouldn’t like me when I’m angry…thankfully I’m not an angry person though. -Mommyish

Mommyish’s post should be titled “What not to say to me since I’m an atheist and you know I am”.

Why? I don’t. They are compassionate, loving, wonderful kids who just happen to not believe in your god or any other god. This does not constitute a CPS case. -Mommyish

1. “You’re a bad mom for not giving your kids religion”

This is one of the only things that truly pisses me off. How dare you tell me I’m a bad mom. My kids are loved and happy, and I refuse to let someone else’s expectation of what their “moral” upbringing should be dictate my worth as a mom. -Mommyish

How did this list start? Ascending or Descending? I’m only asking because the relevancy of this post is at the very bottom. It’s like the entire post is irrelevant until you get to the last two statements. When you make a post like this, it should be relevant through and through, not at the end. That’s like a really bad B-movie. “This is one of the only things that truly pisses me off” Really? Then why didn’t you just make a post about what pisses you off when religious zealots ask you obnoxious questions instead of making this pointless ass list?

I’ll be glad when the need to add .gifs to every blog post to support or convey an argument comes to an end.